When I first decided I was traveling SEA, I planned on heading out at the end of April/beginning of May.  As I did my initial research into Thailand, I saw that April 13 – 15th was Songkran – the Thai New Year, also known as The Water Festival.  There was no way I was going to miss that!

Songkran is known as The Water Festival because the pouring of water symbolizes washing away the old and bad of the previous year, and cleansing the way for the new year. While it has become a hugely commercialized venture aimed at tourists and young adults as another reason to party and go wild dousing each other in water, the traditional practice is actually quite reverent and beautiful.

You take a little silver bowl and pour the water on yourself or over others.

Stuck in a standstill in the Bangkok holiday traffic, I jumped out of the cab and started walking. I stopped at a Wat (Buddhist Temple) where many locals were gathered – chanting and praying, leaving offerings of food for the monks, tying brightly coloured scarves around poles, and lighting incense and candles.

I lit a candle for a friend, and I lit three sticks of incense for myself, each with a separate prayer/desire for my trip – Acceptance, Growth, and Fun.

After making my own offering and prayer, I headed to a park. It was quite hot, so I walked over to an unoccupied water basin to wet my neck and cool off.  Well, I sure cooled off, all right, because out of nowhere I was rushed by 4 or 5 Thai kids and drenched with water! Then a young Thai man took my face in his hands and wiped chalk on my cheeks (chalk markings hearken back to the blessings made by monks during this time). The older women even held off the kids long enough for me to sort out my packs so they didn’t get completely wet (I don’t have a rain cover for them – something that definitely would have come in handy!). We were all throwing water at each other and laughing. 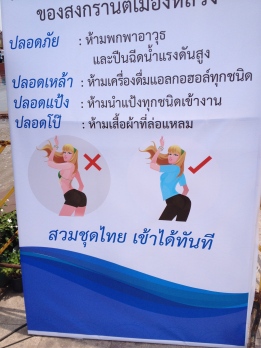 Just a reminder not to be a skanky ho in public. 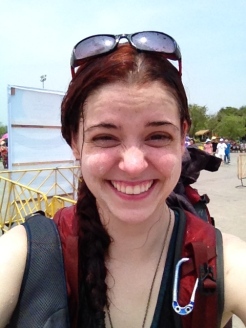 Shortly after my “initiation” into Songkran 🙂

Yep – it happened, and only after about an hour in Bangkok. They wanted a picture with me because I was so awesome looking 😛

There must have also been a parade, because there were a myriad of beautiful and elaborate floats, all with real flowers decorating them. 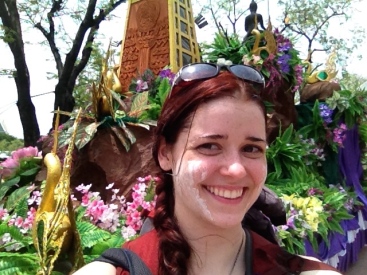 Now, let’s travel up to Chiang Mai, because that’s where the hub of the festivities take place. I stayed at the Imperial Mae Ping Hotel (absolutely gorgeous. Check out my fb album for all the pics), which is just outside the old city.  Tuesday morning rolls around and I head towards the old city and the moat.  It didn’t take long before I reached the moat and the most delightful old woman graciously poured water on my back.  She, a girl, and a young man, and I then continued to pour/throw water on/at each other for the next hour or so. There were so many people around, laughing, throwing water, swimming in the moat – it was a true delight.  We didn’t speak the same language, but we didn’t need to.  We were all wishing each other well and sharing in the joy of the holiday.

I indeed swam across the moat and climbed a wall on the other side!

My water friends across the moat

I was headed to look at some different hostel options for after my hotel stay, and I came across this gem of a place called The Pirate’s Cove. I ended up chatting with some people there and stayed with them all afternoon. They had a legit setup – a hose running into two water barrels, water guns, buckets, and ice.  I admit, I HATE getting hit with ice water, but it sure was a heck of a lot of fun to throw it at other people! Just check out this video – it’s basically what we did for 7 hours. It was even better when there were trucks who also had water barrels and massive fights would ensue. It was like street gang wars, but in a good way 🙂

The 15th is the day of Songkran. The big show. It. Was. Crazy. I would have taken more pictures, but the waterproof pack I got for my phone/valuables (a lifesaver, indeed), was a bit wonky and difficult to use, and nothing was safe from water that day. I mainly just took pictures of the street food, because everyone knew not to mess with water around those cooks! And man, was that food goooood! I got 9 pieces of sushi for $1, and 5 pieces of pork gyoza for $1.50. Absolutely delicious.

The octopus/squid one was my favorite 🙂 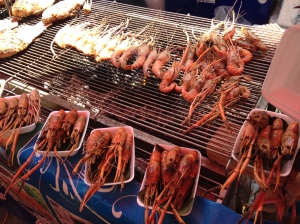 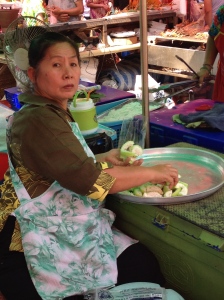 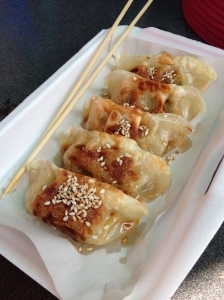 While it was good fun, three days of being perpetually soaked through was enough for me.  I’m glad it’s over, but I’m so glad I got to experience it!