I didn’t visit many museums on my trip. In fact, I only went to three – and they were all sites where great acts of cruelty and torture were enacted and had been turned into historical monuments. Two were in Vietnam. The most horrific was in Cambodia. And the shocking thing is, I hadn’t even known Cambodia suffered a genocide.

Pol Pot and the Khmer Rouge

Pol Pot was the revolutionary who led the Khmer Rouge, members of the Communist Party of Kampuchea. Radicals, they overthrew the government and forced a take over of Phnom Penh, the Cambodian Capital, in 1975. Pol Pot set himself up as dictator, and went about the systematic slaughter of all those who were educated, artists, and of the higher classes. Schools, banks, hospitals, books, currency, all were destroyed in an effort to enforce his vision of a classless, agriculturally communistic society. 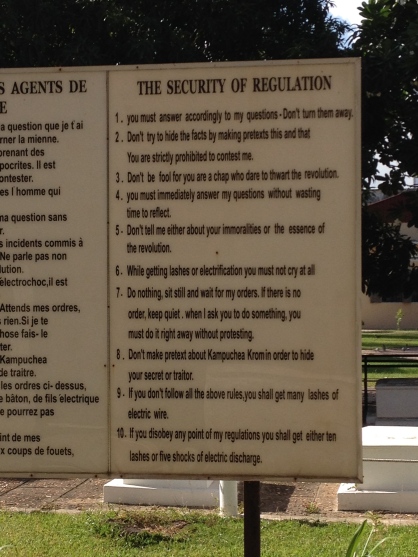 Not only were Cambodians slaughtered, but also any Chinese and Vietnamese living in Cambodia and their offspring. Famine became widespread, and many lives were needlessly destroyed due to lack of available medicine for treatable diseases.

Tuol Sleng, or S-21 as it is more commonly known, was a highschool turned prison – the heart of enslavement, interrogation, and torture of the Khmer Rouge Regime. Classrooms were divided into small cells by wood and brick, and blood still stains the walls and floors. Razor wire is hanging from when it was first placed, in the mid 1970s. 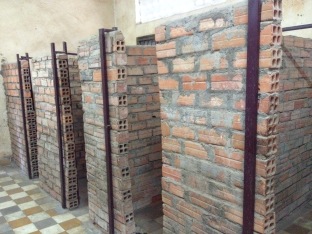 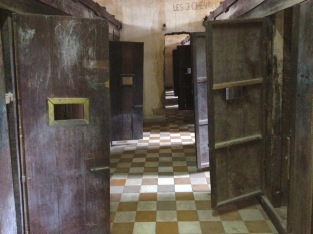 Waterboarding, starvation, electric shock, rape, flaying, and wholly skinning alive were only some of the various methods used to extract confessions to whatever “crimes” the Khmer Rouge had charged them. Of the averaged 25,000 prisoners who went through S-21, only 7 survived.

Mistrust and conspiracies also ran amok through the ranks of the Khmer Rouge, and often those officers who ran the prisons found themselves suffering those same tortures they had recently inflicted upon others. 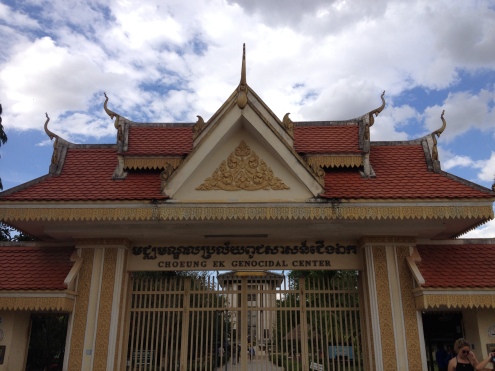 The site of 20,000+ mass graves, Choeung Ek was used by the Khmer Rouge to dispose of the bodies of all intellectuals, professionals, and “traitors” – those suspected of having any connections with the former government or any foreign government. This was by far the most disturbing place I have ever been. Disturbing, sickening, heartbreaking, and tragic don’t even do the site of such evil deeds or the people who suffered there justice.

Doing the guided audio tour, I was shown various mass graves, listened to translated stories of horror from survivors, and saw the Chankiri Tree, against which children and infants were smashed, so they wouldn’t grow up to seek revenge.

All those holes are excavated mass graves. 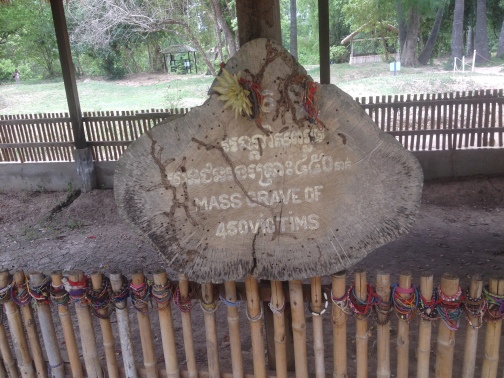 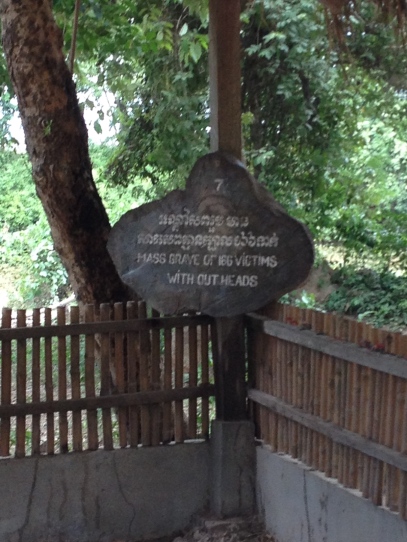 It is speculated these victims had been Khmer Rouge soldiers 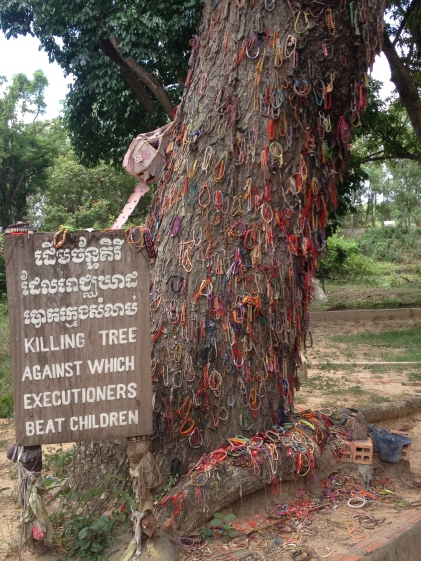 I almost threw up, but was too horrified even to cry

This mass grave was next to the Chankiri Tree

What makes the Killing Fields even more visceral is the fact that there are human remains being found even to this day; bones, teeth, and clothing continually rise to the surface, particularly after inclement weather. Every few weeks, workers collect the new remains and preserve them for display. There were signs to be aware of where you were stepping, particularly if there was a mass grave nearby. 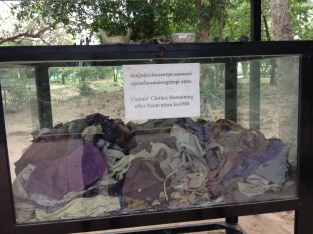 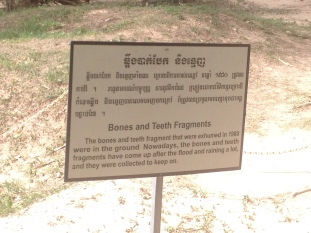 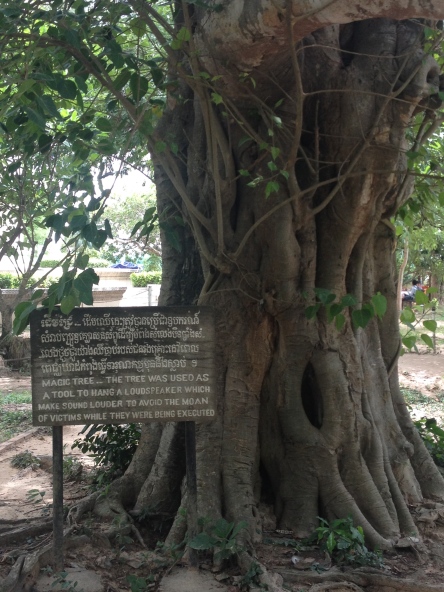 Bone and clothing fragments coming to the surface

The Cambodian people have raised a memorial stupa which houses a fraction of the remains. There are still bones being discovered, and not all of the mass graves have been excavated yet. 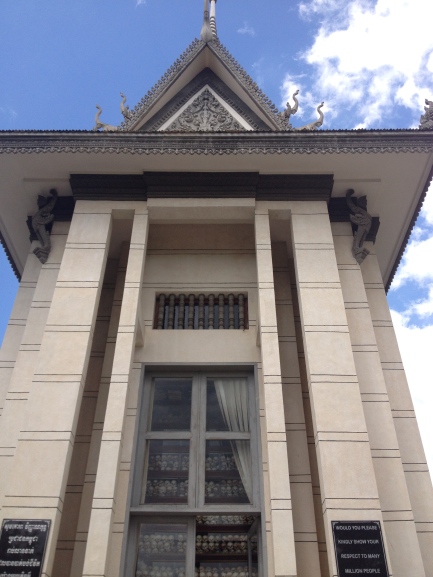 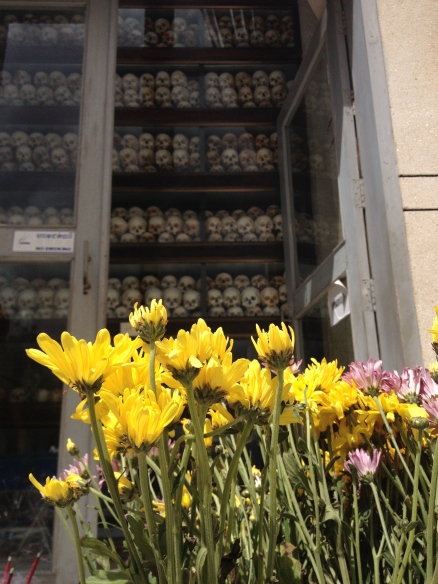 What staggers and confuses me is the complete disregard any other country had for the desecration that was happening in Cambodia.  The entire world simply turned a blind eye to the suffering and slaughter of millions. Pol Pot was even welcome at the UN until the early 1990s!

We are taught about the WW2 Holocaust, and even to some extent the genocide in Rwanda. It is mind-blowing that I had never even heard about this Cambodian Genocide until I was actually in the country. Over 3 million people were slaughtered by a ruthless, evil regime. Half the Cambodian population is under 15 years old. And it was nearly as bad being forced into the Khmer Rouge army as being their victims.

When I was in Siem Reap, I met a man named Douk who was selling books. He had no arms and was severely scarred. He carried a sign saying he had suffered a land mine when he was a child, and when I talked to him, he said he had been in the army when he lost his arms. He was a child forced into Pol Pot’s army.

Knowledge is power, they say. And I hope that by sharing this history and my experience, we come one step closer to preventing something so horrible ever happening again.

1 Response to The Cambodian Genocide