A New Look on New Year’s

Ever since moving to New York at 18, I’d fallen into the trap of trying to make every New Year’s Eve as raucous and debaucherous as possible. I had a good run of it, too; New York City in general, and Queen of the Night specifically, were ideal places for just such behavior.

But the older I got, and the more I sought out connection and a fun encounter, the more disappointed I was left. The build up, the hype, the crushing letdown of unmet expectations. It was frustrating, to say the least. Add on top of that I was getting to spend more and more NYEs in different countries and had higher hopes, only to be left sick or alone. I was becoming disillusioned with the whole thing.

NYE 2017 into 2018 I was flying from China to Ireland and couldn’t have been more excited at the prospect of getting to spend my NYE in Dublin! I think I might’ve been looking to make up for that one time I didn’t make out with that Irish guy on my first NYE in NYC…However, Fate had other plans.

The day I was flying to Ireland I felt myself coming down sick. I made it through my brother’s wedding ceremony (the reason I was in China in the first place), then was bundled on a bus to the airport, feeling worse and worse as the day wore on. A 21hr travel day, an early period starting en route, and two weeks of the Chinese air pollution working in my lungs saw me arrive at Dublin airport sick as a dog. It was also the first time I was ever hassled at the border and thought they might not let me in!! In true Irish style, it was a drizzly and cold welcome about 7pm on NYE, and even though I was utterly exhausted and feeling miserable, I had to try and find specific clothing for my stint at the seal rescue, which I was being picked up for the next day. Several hours of increasingly wavering steps in the wet and the cold later, I stumbled into my hostel. I went to sleep, woke up at 11.30pm, staggered sickly to the nearest pub, got a pint, blearily rang in the New Year with a less than rousing version of Auld Lang Syne, and was back in bed asleep by 12.30am 2018.

So, with THAT unfortunate episode as my first Irish NYE experience, you better believe I was wicked excited to get another go of it a mere two years later!! My latest trip to Europe was ending in Ireland (my third time visiting), getting to spend a week with some of my dearest friends.

I again arrived on NYE (this time from Scotland – a much shorter flight, let me tell you!), and made my way to my friends’ Dublin flat. While I’d been thinking a jaunt to the nearest pub was in order, we were having so much fun playing games and catching up that suddenly it was time to pop out to see the fireworks! No worries – there’d be plenty of people on the street; I’d probably make some wild connection with an attractive Irishman in passing and have at least a quick smooch.

We were only a few minutes walk down the River Liffey to where the fireworks were going to be displayed. Well, turns out it wasn’t just fireworks – it was an entire light show set to live orchestration! It was the best NYE display I’ve seen yet! We, and everyone around us, were Ooohing and Aaaahing, laughing and singing, hugging, counting down and kissing. As the clock struck midnight and 2020 began, I was surrounded by my friends – people who love and accept me, no matter where I am, no matter what emotional or mental state I’m in. People who have rescued me from dangerous and abusive situations; welcoming me into their home, giving me a place to rest and heal – helping me bounce back. Putting up with my wild shenanigans! And I realized, in a completely new way, how utterly contented and blessed I was, to have such genuine and wonderful people in my life, and that the feelings I was having with them that night was a breakthrough internally for me. Why was I searching for a fleeting physical connection with a stranger when I had such strong and deep flowing ties with people that love me for ME? And I love them; fiercely and deeply. I’m not sure I’d ever quite accepted that, either.

As we slowly made our way back, dodging carousers, and me chasing an adorable puppy or two, I basked in the joy I was experiencing. We stopped for some mini photoshoots on the bridge; the Harp installation lit up behind us. And (as I might’ve had a drink or tree by this time), we of COURSE had to do some wacky poses! 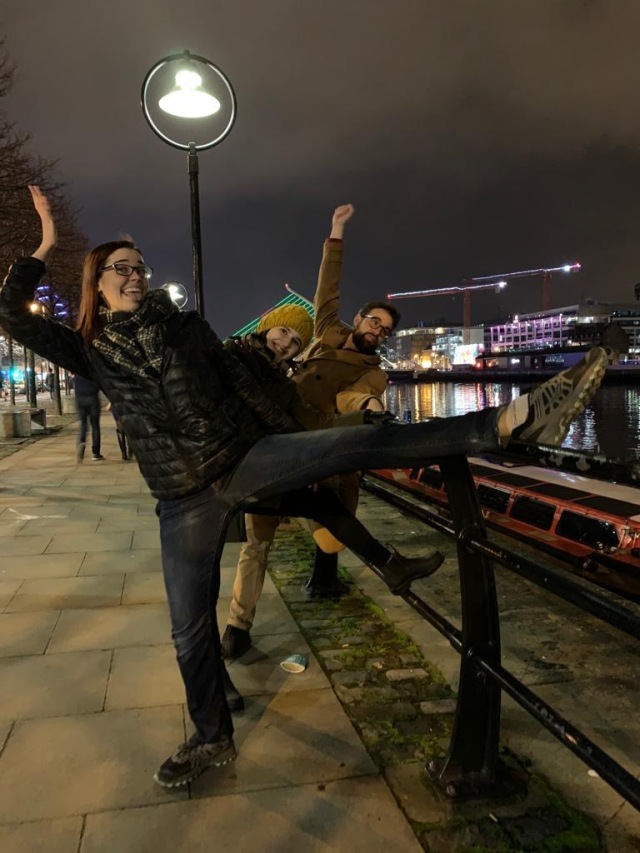 It was even more fun when some people started trying to copy us, then comment how hard it was! I laughed and flippantly threw over my shoulder, “No, it’s not!”

The amount of laughter we had that night, the good vibes, the brilliant company, the new revelations… 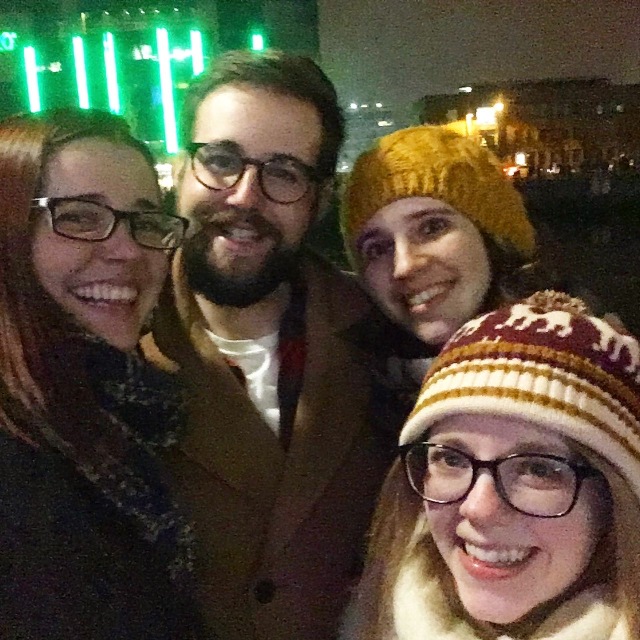 It left me glowing for a week.

1 Response to A New Look on New Year’s