Elephants are a matriarchal society, and babies suckle for up to 7 years. Eles love to be together, and the longer they are a family group, the closer they get (a bit unlike human families it seems to me).

Female elephants can have babies until they’re about 60, and there’s nothing better than a new baby to love and adore – even if it’s not theirs. They form small herds, often based around an expectant mother or a new baby. The mother has carried the baby for nearly 2 years – she welcomes the help! Particularly if this is her first baby and she doesn’t know what to do. (Check out this post  about a difficult, but ultimately successful, birth story) The group comes together to rear and protect the baby, often being overly protective. Put a bunch of old ladies and babies together and what do you get? Drama!

Eles are constantly touching each other with their trunks – to reassure and comfort, and as a form of play. 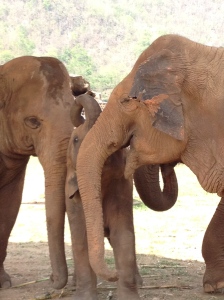 Aah, but not if I eat YOU first, little Yin Dee!

Their trunks are amazing and incredibly dextrous

It is funny watching the antics of the babies – racing around, playing with each other, making their mahouts chase them, and making their nannies frantic with worry. 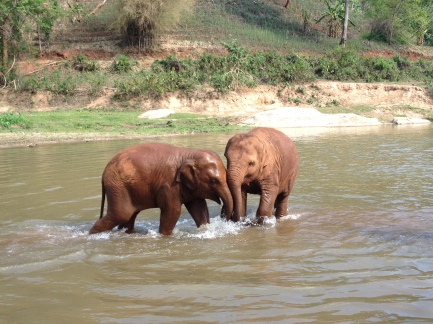 And then cooling off in the river.

If something startles the baby and they cry out, all the nannies come charging over – immediately ready to protect and comfort. The sounds they make are amazing, and you can hear a rumble all the way across the park. The first time I heard one of their roaring rumbles, I wondered if ENP had rescued a lion somewhere along the way!

*Random Tidbit: Did you know that sound mixers often use elephant, lion, and donkey sounds blended together to make monster and dinosaur noises for films?

This is what had scared Yin Dee and Dok Mai. They had been truly charging and ramming each other before I got the video going.  It was awesome to see!

Several of the elephants are partially or completely blind.  Jokia has a tragic story.  She was pregnant when she began working at a logging camp, and was in the middle of working when she gave birth. The baby rolled down the mountain, still in the sack, and died. Jokia went into a deep depression because of her loss, and she refused to work. Her mahout “motivated” her by shooting her eye with a sling shot.  When at one point she swung her trunk at him, he stabbed out her other eye.  Jokia is now completely blind, but was still made to work – hauling massive logs up dangerous, mine-scattered mountain terrain. Thankfully, Lek found Jokia and was able to rescue her and bring this injured elephant to Elephant Nature Park.

Mae Perm was the very first elephant ENP rescued.  When Jokia arrived, Mae Perm immediately went up to her and started touching Jokia’s face with her trunk – she could tell Jokia was blind.  They haven’t been apart since. 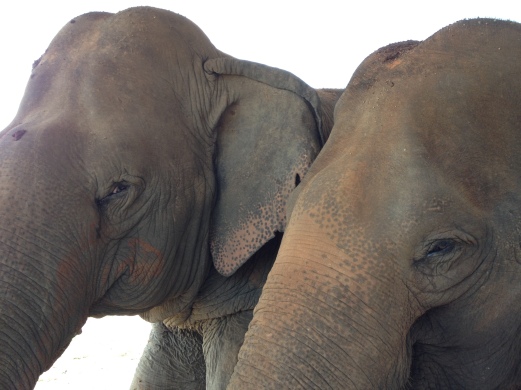 Elephants can be drama queens, and they particularly don’t like to be separated from their best friend. It’s always best to leave sight lines between the old girls 🙂