No, it’s not the name of some strange leaving ritual (though now that you mention it…) – it’s the stretch of land right at the tippy top of the South Island. Weather was inclement, but I wasn’t going to let that stop me (good thing, too, because 3 out of 4 days down south seemed to be “inclement”). I had several days before meeting a friend down in Christchurch – no better way to fill the time than exploring!

First stop was Wharariki Beach – an impressive beach accessible only by walking over private tracks of rolling pasture.

I mentioned the beach was impressive – I think what made it so was that it was unlike any beach I’ve been to before. This wasn’t a pretty, sandy expanse you’d sit on under an umbrella with a coconut cocktail. Large rock formations jutted from the earth making for nice coves and shelters for the local seals (of which I saw several). The sand was dark and gritty, and the waves crashed wildly. This beach was a force of nature, absolutely majestic to witness.

It felt good to stand where three elements came together so strongly. As someone who struggles with depression and anxiety, it’s so easy to fall into the implosion trap – spiraling into myself, and the deeper I go the harder it is to come back to a level position. But witnessing nature, pure, wild, unfiltered – it takes me out of myself and reminds me how small I am and that life continues on. The water crashes on the shore, minute after minute, day after day – sometimes softly, sometimes violently. It’s ever changing, and yet it goes on. So will I. It’s a lesson that keeps coming back – and probably always will. Just like the waves. Which is fine. I will take every second of peace and realization I can take.

After a refreshing (if chilly) walk back to the carpark, I popped on over to Farewell Spit proper.

Back in February, over 400 Pilot whales beached themselves here. Department of Conservation workers and hundreds of volunteers tried to save the whales, managing to re-float 100, but half of those eventually re-beached themselves and an estimated 70% of the whales died. It was the third worst beaching in New Zealand history. 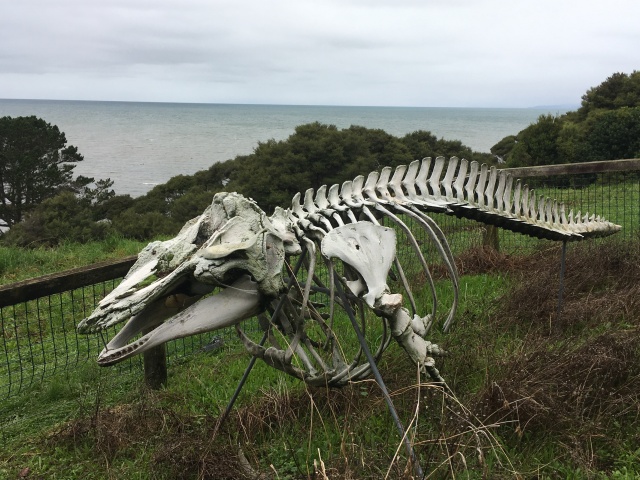 A baby pilot whale skeleton (from much longer ago than the February beaching) on display at the cafe overlooking the spit.

I remember hearing about this back on Waiheke and being heartbroken. Thankfully, there were no such emergencies when I visited (though you better believe I would’ve been right there doing all I could).

Down on the Spit

The face of someone who struggles each day, but on this day remembered that life was worth living